S. and I went to the Maarse Plassen near Weesp and to the Gagelbos near Utrecht to re-do a former photo and a dancing film. When we arrived at the area where we had been before, we saw that the area was partly flooded by recent rain. Although we came prepared with boots, we quickly found out that even boots get filled up when the water is deep enough. S. even managed to sink 50 cm down into a small puddle. The good news was that we re-created a former picture by improving pos 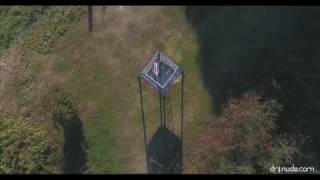 Maya was kind and flexible by responding positively on my last-minute request. I picked her up at the nearby village and we went to the Engelermeer area. This is a recreational area with sand beaches and... a watch tower. The unique feature of a watch tower is that it is the highest point in an area, and from ground level you cannot see what happens on the top level. Nude modelling requires some privacy, and on top of a watch tower it's somehow secluded. And clearly visible f

More cold: Sophie modelled in the forest on another cold day

Emergency landing with no control